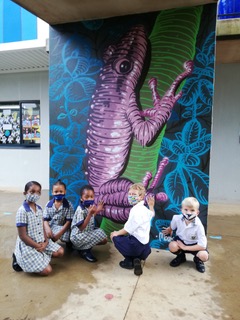 The Kloof frog is an athletic little amphibian, an excellent swimmer and jumper with large disks on the tips of its fingers and toes which allow it to defy gravity when it climbs vertical slippery surfaces, like the damp underside of a waterfall. Alarmingly, the Kloof frog is endangered and only has around 500km2 of its natural habitat left, including the Krantzkloof nature reserve, just down the road from Kloof Junior Primary.
The image and character of the Kloof frog is becoming more familiar to the KJP community as a variety of paintings in their honour, in different styles by different artists, can be seen on the walls of the bridge complex next to Stokers in Kloof. The famous artist Giffy, who champions murals about endangered species in Durban, a good friend of mine, taught me about the Kloof frog. He invited me to join his Kloof frog mural series aiming to create awareness and together we painted these brave little creatures under the local Kloof bridges.
The mural I painted earlier this month at KJP is also an impression of the Kloof frog and a continuation of that series. I hope the artwork stimulates the imaginations of the young students and encourages them to become brave and responsible custodians of our beautiful natural world. I also believe that it is important for the students of KJP to feel a connection to their environment, which encourages a sense of belonging and community. I hope that the Kloof frogs painted on the wall at school and in town will encourage the understanding that the Kloof frog is also a valuable part of our community.